I want to share an interactive tool here that I developed as a way to show how young readers are coordinating complex reading processes as they learn to read. Radar charts, a standard feature in Excel spreadsheets, will help you visually display the information readers are actually using:


Knowing the kinds of cues that a reader uses, and the kinds of cues that a reader overlooks, can help you target your teaching. On the radar chart below, a lopsided corner will lean or stretch out toward the reader's "go-to" cueing systems used more often, pointing to areas of strength or even overuse. Targeted minilessons can help readers notice the kind of cues they are missing, whether meaning, structure, or visual cues.

The chart below works with running records to allow teachers to quickly see if readers are effectively coordinating three kinds of cues as they read a passage. If you know how to conduct a running record (e.g., DRA, Reading Recovery, Fountas & Pinnell), you can instantly visualize your data here and create your own radar chart by typing each of the MSV percentages into the yellow cells in the chart below. The tool here is interactive in real time: enter your scores in the yellow boxes and the chart below changes instantly.

For an alternative version using miscue analysis format in Kidwatching (Owocki and Goodman, 2002) rather than running records, click here.)

This week, Lisa Guensey and Michael Levine exposed the "confusion and disarray in the educational aisle of the App Stores", noting that "among free apps, more than 50 percent focused on teaching children to recognize the letters and sounds of the alphabet. Less than 10 percent of free apps focused on reading comprehension, and even rarer were skills like reading fluency (the ability to read without stumbling over certain words) and self-expression."  However, they also point out that the best-selling apps that parents buy tend to focus on simplistic reading rather than the creative literacy that educators most value. So what's going on here?


In a forthcoming article, fellow literacy researcher Jennifer Rowsell and I look critically at apps to examine their underlying assumptions about learning. We found that rather than an educational definition of literacy based on reading research, an oversimplified and commonplace notion of reading is  operating here-- for both parent consumers and app developers. And oddly, it seems based on 20th century learning models of drill and memorization in flashy flashcards, ignoring the rich potential of 21st century literacies in touchscreen animation and digital media production.

Guernsey and Levine call for clear criteria to ensure educational apps truly promote learning that has relevance beyond the screen, such as literacy learning that is meaningful, authentic, and social. Toward that end, Jennifer Rowsell and I have developed a rubric and mapping tool to compare educational apps on key aspects of digital literacies, that move well beyond word and letter recognition. Importantly, these rating tools are grounded in our ethnographic research in which we closely observed children with a range of apps to see if and how deeply they engaged in literacy. The most engaging (and popular) literacy apps earned high ratings in all dimensions:  multiplayer activity that allowed children to play together but also to design their own content using image, sound, movement, and animation in open-ended play. Good apps, like good books, also engaged a learner's passion for learning more and could be shared on digital networks.
Posted by Karen Wohlwend at 7:48 PM 1 comment:

Hot Topics in Literacy Education for 2016

The International Reading Association released its annual list that forecasts "hot" topics in literacy education. Hot is not the same as important, but indicates an area of high interest or even debate among reading experts.  Conducted by Jack Cassidy,Stephanie Grote-Garcia, and Evan Ortlieb, the 2016 survey polled 25 leading literacy scholars and researchers to find what's hot and what's not.

Hot Topics in Literacy Education for 2015

The International Reading Association released its annual list that forecasts "hot" topics in literacy education. Hot is not the same as important, but indicates an area of high interest or even debate among reading experts.  Conducted by Jack Cassidy and Stephanie Grote-Garcia, the 2015 survey polled 25 leading literacy scholars and researchers to find what's hot and what's not.

Learning to Read, One Tap at a Time 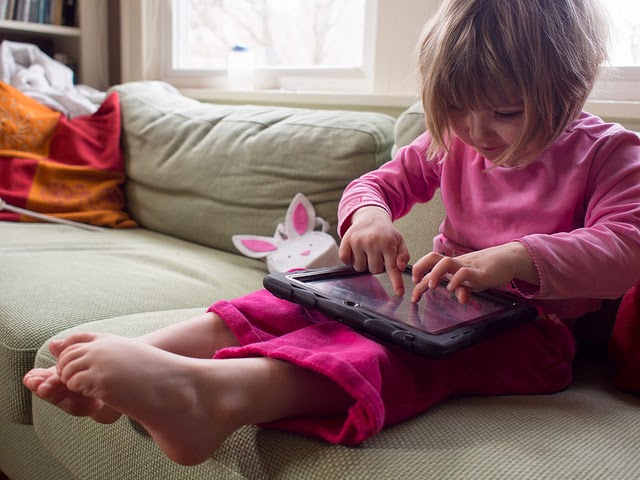 Three-fourths of U.S. families with young children now have mobile devices (e.g., smartphones, tablets). These accessible digital tools are equipped with touchscreens that respond instantly to a fingertip swipe and are just the right size for young children to handle, carry, and operate. However, the icon-based interface of touchscreens organizes space and image very differently than books. It's time to expand Marie Clay's familiar book-based Concepts About Print: the understandings that help readers move front to back, left to right, and top to bottom through a book or to focus on the black and white lines of print rather than the images when reading.

A child with a tablet balanced on her lap is learning that the touchscreen is organized by a grid of colorful squarish icons that represent software applications, and importantly with little or no print.

Each icon opens an app at the touch of a finger and reading involves more taps…on arrows, “x”, checkmark, trashcan, pencil, plus signs and so on. These icons are not arranged in the orderly rows of print on a page but are scattered along the top, bottom, or corners of the screen.

I argue that touchscreen technologies operate with an expanded set of conventions for interactive modes including finger swipes, icon recognition, and voice controls; in other words Concepts Beyond Print. (For more details, see a forthcoming chapter in the book Reclaiming Early Literacy edited by Kathryn Whitmore and Rick Meyer.)

Today’s young children are learning printless ways of reading—one finger swipe at a time. With each tap, our emergent readers are learning interactive and flexible orientations to digital reading: recognizing icons as activators or portals, expecting a finger action to produce a screen change, and persisting when nothing happens, knowing that an area of the screen might contain an invisible icon that may appear when pressed. And accordingly, our teaching must change to recognize all that children already know.
Posted by Karen Wohlwend at 10:17 AM 3 comments:

When young children play together in school, they produce action stories with themes that draw upon experiences from their worlds, including themes from their favorite media. When playing heroes and villains, this often involves mock fighting, which can be prohibited in school. Yet children sometimes play these forbidden themes “under the radar”, claiming that a Tinker Toy sword or a gun made of Legos is "just a stick” or “ car” or “design” or anything else in order to turn a pretend weapon into something innocuous and acceptable within the classroom. Of course, this shows so much about the ways children negotiate the complex tensions among peer culture, school culture, and popular culture in ways that allow them to play themes that matter to them. But this pivoting and pretending also shows how play functions as a literacy of fluid action texts.

During one of my studies of literacy play in early childhood classrooms, several boys created paper tubes which they immediately used as light sabers in impromptu Star Wars play but when the teacher approached, they stopped dueling and began swimming the tubes along as "electric eels". When the boys enacted eels, they quietly held the tubes horizontally and maneuvered individually, walking side-by-side, sometimes tumbling the tubes in slow circling motions or undulating waves. When they enacted light sabers, they turned toward each other, tilted the tubes diagonally or vertically, and voiced the shoom, shoom, shoom of humming light sabers as they engaged each other in momentary fencing moves.

This Star Wars example shows how play functions as an embodied literacy to produce play narratives with action texts that the boys could use to pivot the meanings of their paper toys. Action text describes how movements convey meanings when children play a shared narrative together. In other words, their swooshing sword fights relied on moves with paper tubes that conveyed a nonverbal (and covert) meaning shared among the boys. Their swings and taps with paper tubes could be read and reread as fencing moves in a laser swordfight by other children who were also Star Wars fans.

We tend to look for some print on a page when we consider children’s literacy development and overlook the action texts in children's play.  In a digital world where webpages routinely include YouTube links to videos on every imaginable topic, actions clearly speak louder than words. In this dynamic textual landscape (Carrington, 2005), children’s played texts take on new significance as a way of understanding and producing live action texts. At the very least, we should be looking beyond print media and recognizing and mediating the fluid meaning-making and embodied storytelling in children's play that develops skills for communicating through digital media.

For the full paper, see:
https://www.academia.edu/5487251/Playing_Star_Wars_under_the_Teachers_Radar_Detecting_Kindergartners_Action_Texts_and_Embodied_Literacies

Technology Deserts and Other Imaginaries of Childhood

Notions of childhood morph as rapidly as the technologies that zip in and out of our daily lives in an endless stream of updates: 1.0, 2.0, 3.0, and so on.  As early childhood teachers, our visions of childhood shape how we teach young children who are living immersed in rapidly shifting technologies, literacies, and global innovation. Our teacher imaginaries about childhood cause us to offer one literacy to children while making another technology-based literacy off-limits. On one hand, visions of developmentally appropriate practice privilege “natural” materials, creating oases in our classrooms from a daily barrage of popular media and glowing screens. On the other hand, a vision of young children as "digital natives" and teachers as "technology laggards" blames teachers for turning the early childhood education landscape into a widespread technology desert.

However if we recognize that our imaginaries of childhood are dynamic and negotiated ideas, we can open up possibilities to look critically at these visions, question our assumptions, and reconsider ways of doing things. We can question:
Digital toys and tools are expensive and out of reach for many families as well as for many early childhood classrooms.  A financial divide separates not only have and have-not households but also early education centers--doubly discouraging as schools are the key site for ensuring equitable and regular access to new literacies for all children.  Recently in Literacy Playshop workshops, I've talked with many preschool teachers excited to try apps, iPads, and filmmaking with young children. Their faces fall when they discover the price of tablets; even the $100 for the now-discontinued  Flip cam would be out-of-reach. These dedicated preschool teachers who fund so much of their curriculum out of their own pockets have no idea how to find the money to bring digital tools into their classrooms. In these cases, we are asking all the wrong questions. The root of technology deserts in early childhood education is not teacher resistance based on a romantic vision of natural child but the pernicious and systemic under-funding of early childhood education.
Posted by Karen Wohlwend at 2:00 PM 1 comment: